Completely Working! Very Unique! Very RARE! Very Good looking cosmetically! Very fun to play.  You will not find a working model of this piano anywhere else, I do believe. I read somewhere they only made 12 of these pianos once Lowrey took over the company.  This very rare piano, I rescued and I had to revive the organ circuitry, clean the organ contacts, plus a few other things, then tune everything up, and WOW how cool is this? In my video demo below you can hear how symphonic the organ actually is.

The Story & Clark Piano & Organ Company is one of the most popular piano manufacturers in America.  Hampton L. Story opened his first music store in Burlington, Vermont in 1859.  In 1862 Story went into partnership with a piano builder by the name of Powers and formed “The Story & Powers Company”.  Story & Powers was the first piano manufactory in the state of Vermont.   In 1867 Jacob Estey of the famous Estey Organ Company offered H. L. Story the Estey Organ Agency for the Midwestern United State, so H. L. Story left his business in Vermont and relocated to Chicago.

In 1868, H. L. Story admitted Mr. Isaac Camp into partnership, establishing the firm of “Story & Camp”.  Story & Camp soon became leaders in the piano and organ trade throughout the Midwest with large retail stores from Chicago to St. Louis.  In 1876, Mr. Story sold his interest in “Story & Camp” to the Estey Organ Company, forming the firm of Estey & Camp.

After Mr. Camp’s departure from the firm, Mr. Story then went into partnership with Mr. Melville Clark to form the famous firm of “Story & Clark” in Chicago.  Story & Clark was initially a large retailer of musical instruments, but soon began manufacturing a very successful line of reed organs.  In 1888 “The Story & Clark Organ Company” was incorporated with E. H. Story (son of H. L. Story) as President and Melville Clark as Vice-President.  The Story & Clark Organ Company soon began manufacturing square and upright pianos in addition to their reed organs.

In 1895 the firm was reorganized as “The Story & Clark Piano Company”.  Like their organs, the pianos that were designed and built under the supervision of Melville Clark were considered to be superior instruments in quality and tone.  In 1896, Story & Clark expanded to Europe, entering into partnership with “F. Kaim & Sohn Piano & Organ Company, Ltd.”, to established The Story & Clark Piano Company of London.  The firm had several warerooms located in London and Berlin.
Melville Clark withdrew from Story & Clark in 1900 in order to concentrate on building player pianos under his own name, yet the firm continued to operate under the “Story & Clark” name after Clark’s departure.  By this time Story & Clark was building several lines of very well made upright pianos.  Because of their huge success, the firm was able to build a second factory in Grand Haven, Michigan in 1901 in order to fill demand for their pianos.  This second factory allowed Story & Clark to add several lines of player pianos and baby grand pianos to their product line throughout the ‘teens and ‘twenties.
Story & Clark is one of the few American piano manufacturers to survive both The Great Depression and World War II without being absorbed into a larger conglomerate.  In 1962, Story & Clark was purchased by the Lowery Organ Company.  The firm built pianos under both the “Story & Clark” and “Lowery” brand names.  The Story & Clark name was purchased by The Classic Player Piano Company in 1991, then was purchase by QRS Music, Inc., in 1993.  QRS Music is still producing pianos under the Story & Clark brand name today. 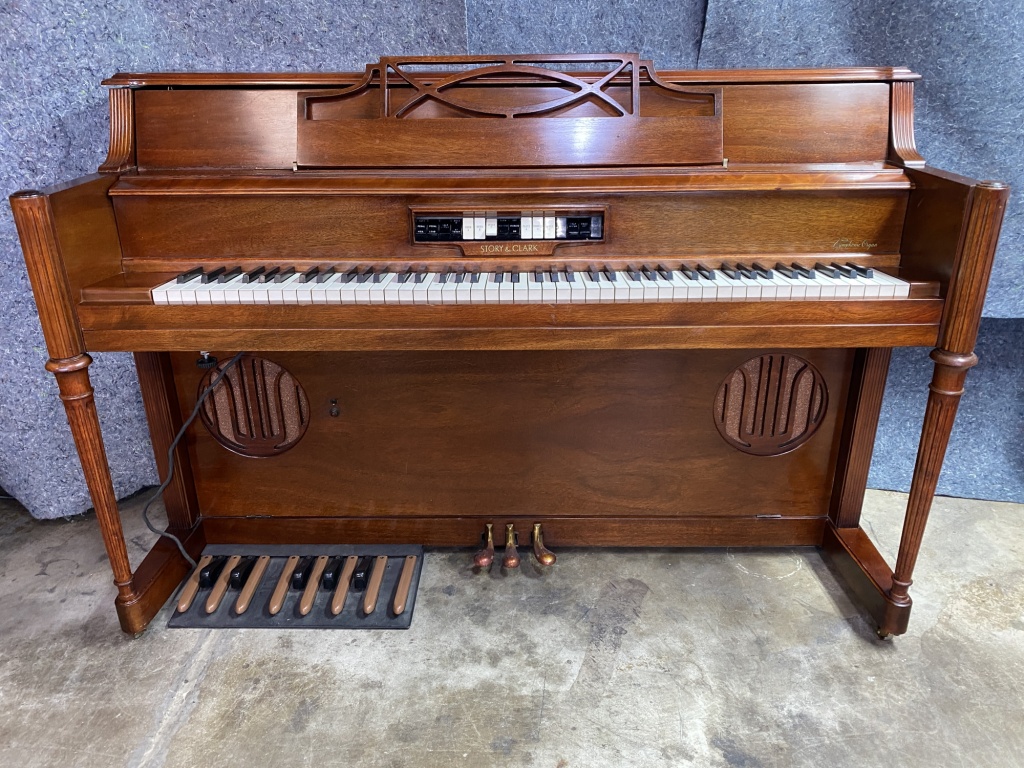 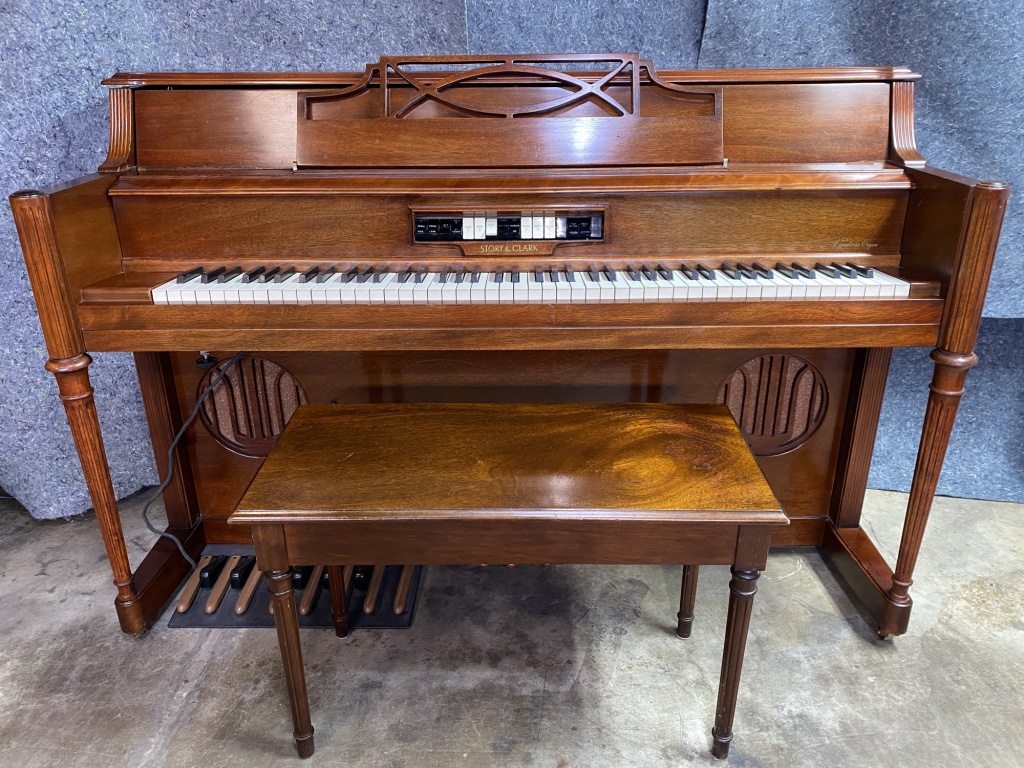 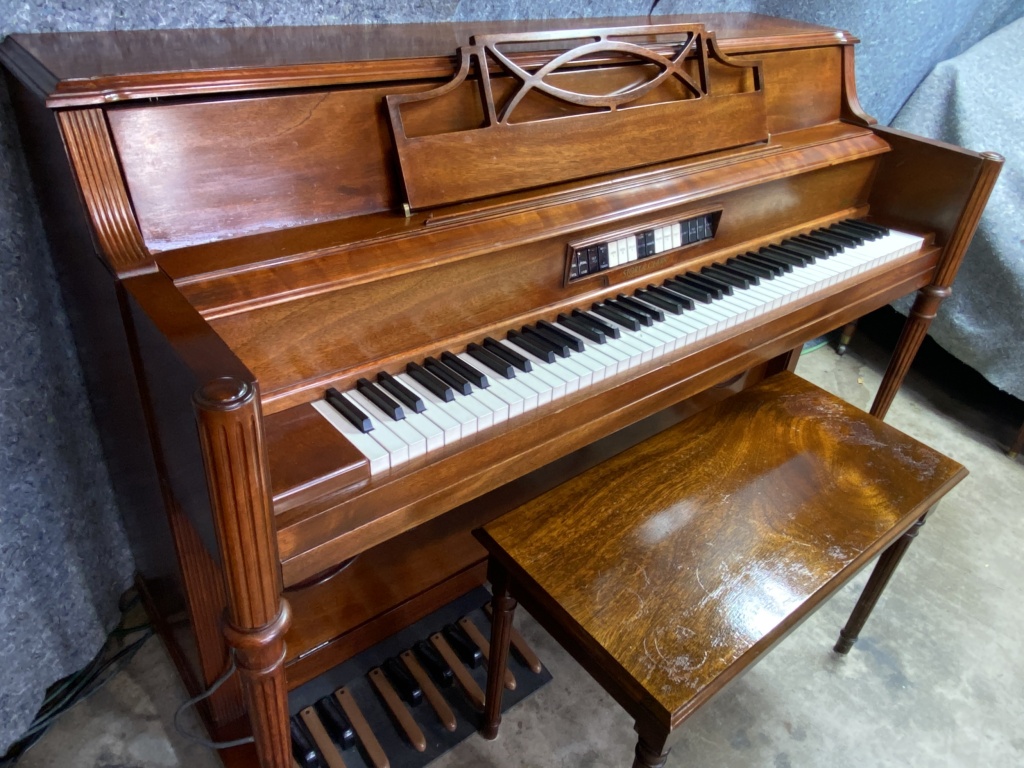 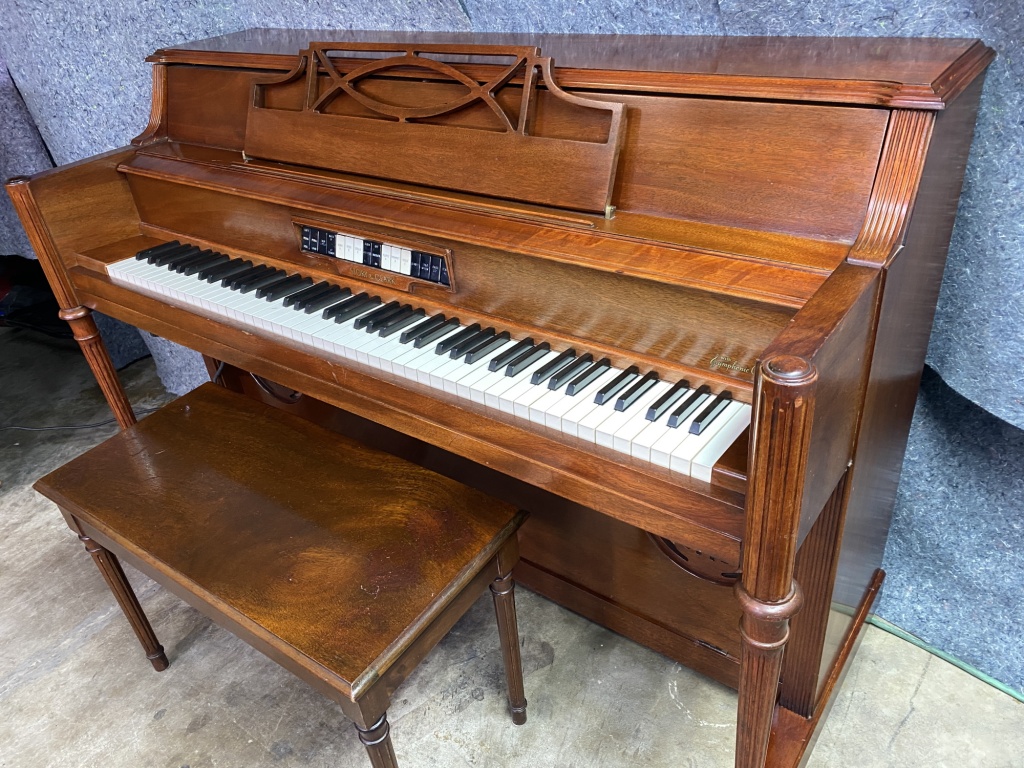